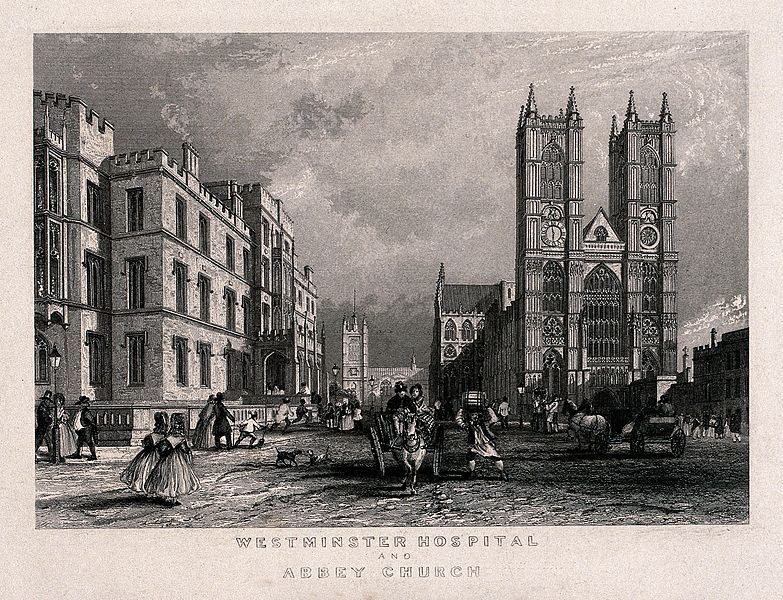 The Collegiate Church of St Peter’s, Westminster, or Westminster Abbey, is a Royal Peculiar. This means that it is neither part of a diocese nor under episcopal authority; rather it is under the direct jurisdiction of the sovereign. The original abbey, consecrated during the reign of Edward the Confessor in 1065, provided a new monastery for a community of Benedictine monks. It was situated on a marshy area of land known as Thorn Island, a few miles west of London (hence, West Minster: minster west of St Paul’s).

The abbot and monks surrendered their abbey to the Crown in 1540, as part of Henry VIII’s dissolution of the monasteries. The statute 31 Hen. VIII c. 9 on the 17 December 1540 reconstituted the former abbey as the cathedral of the new diocese of Westminster, under Bishop Thomas Thirlby. The old abbot, William Benson, along with the prior and some monks stayed on as the new dean and chapter. The church continued in this role until the abolition of the diocese in 1550, before the accession of Mary I saw the brief reinstatement of the Catholic monastery. A charter of Elizabeth I on 21 May 1560 founded the present collegiate church, alongside the school. It was also at this point that the monarch was instituted as Visitor.

During the Interregnum, the College came under the control of governors appointed by Parliament; most of the royalist prebendaries had fled the Abbey over the course of the war, being replaced by Puritan preachers and lecturers.  At the Restoration in 1660, the Elizabethan constitution was reinstated, with the chapter consisting of a Dean and twelve Prebendaries (only four of whom had survived their exile and returned to their stalls). This arrangement survived until the Ecclesiastical Commissioners of 1835 and 1836 recommended the reduction of prebendaries (thereafter called canons) to six, which was completed in 1859. A Westminster prebend was lucrative and highly sought-after, explaining the relatively low turnover within the chapter and the infrequency of resignations. Many members of the chapter went on to become deans and bishops (indeed, the reverse was often the case), and between 1666 and 1802 the deanery of Westminster was held in commendam by the poorly-rewarded bishops of Rochester, since the income of the bishopric was substantially lower than that of the dean (the dean’s income was on average £2,979 by 1834 whilst the bishop’s was £1,523).

The Elizabethan Charter also confirmed the foundation of six minor canonries (sometimes called petty canons), along with lay vicars and choristers. The musical foundation was led by the precentor (known as the chanter up until 1794), who was one of the minor canons, alongside the organist. Throughout the eighteenth and nineteenth centuries, it was common for ordained clerics to be appointed to the choir as lay vicars whilst also being committed to serve as a minor canon whenever a vacancy arose. In fact, there are only a very few exceptional cases where minor canons were installed after not having served as a layman of Westminster at all. For the other laymen not destined to hold a minor canonry, there was a probation system in place by which singers would subscribe and then be installed usually a year later, subject to requirements. In 1731 an order of Dean Joseph Wilcocks established that six out of the twelve laymen in the choir would be ordained and serve as priests in the abbey.

Most of the abbey’s income came from rentals and fines from property owned corporately by the Dean and Chapter. The Ecclesiastical Commissioners recorded that from 1829-1831 the average net yearly income of the Dean and Chapter of Westminster was £19,928. They owned estates in the counties of Southern England as well as in London and were responsible as patrons for over twenty parishes by the eighteenth century. They also held ecclesiastical jurisdiction within the City of Westminster: the parishes of St Margaret’s, Westminster and St John’s, Smith Square as well as the proprietary chapels in Duke Street, Broadway and Knightsbridge.

The abbey is famous for its royal connections, as the coronation church since 1066 and as a site of internment of British monarchs. Its popular image as a shrine of illustrious Britons maintains its reputation as a place of high sacred and secular standing.